For the love and passion of words

One can be stifled and intimidated by the magnanimous mind and never feel accomplished enough to express oneself.

That is the design of the masters of the glass bead game who at the pinnacle of their narcissism are found hanging another piece of paper on the wall to award their accomplishment.

I do not disrespect certification but only dream of a world where the paper you hang on your wall did not equate to a right to life or opportunity. I only dream to be free from corruption, nepotism, and the clandestine passage of rights granted to the privileged.

There are critics on every corner to criticise your grammar and completely miss the point. Critics are as numerous as roaches in garbage.

Available now on Amazon - He never intended to be the most infamous man in history and now he is on the run just because he was trying to improve life for everyone. -The Praus Probability- a new novel by TJ Ginn

Be sure to see 'Professor Brainstein Presents -Physics 101- on YouTube

Perihelion Engineering - 'The Universe Not in a Nutshell 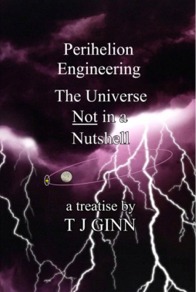 Ten years in development...
Perihelion Engineering, ‘The Universe Not in a Nutshell’ is the most important publication of the twenty-first century. TJ Ginn breaks the bonds of traditional physics to redefine long accepted norms.
Causality and the Big Bang theory are refuted. The velocity of light is proved to not be fundamental. Combustion and thermodynamics is taken to new horizons and the magic of magnetism is revealed to be push and not pull as well as gravity being shown to be pressure and not a magic unsolvable mystery attractive force.
For the first time in science history, dark matter is defined, as well as the red shift observation refuted, to support Albert Einstein’s original proposal that the universe is infinite.
The unified theory is here… “The universe is in a Nutshell and the Nutshell is infinitely large.”
The ‘Universe Not in a Nutshell’ breaks from physics conventions for a new viewpoint. The problem with our sciences is that it is much like the old adage – ‘a man was looking in his yard in the evening. His neighbor asked him what he was looking for. “Why, I am looking for the keys to my car.” The neighbor helped him and after a while he asked, “Is this about where you lost them?” The man replied, “no, I lost them in the house.” Dismayed the neighbor asked, “Then why are you looking out here?” The man replied, “Because the light is better.” This is my version of ‘The Streetlight effect’ and it is prevalent even today.
Our observations are always evolving and as in the days of Nicolaus Copernicus we learned our observational error and we saw the earth truly going around the sun. We have failed in so many aspects with the Big Bang view. It is totally wrong primarily because the speed of light is not fundamental.
“I apologize for the high cost of printing, but it is a full color exposé, which is essential. I am not accustomed to apologizing ahead of a release, but I am trying to put this in the hands of everyone. Though I tried to write this for even the non-science acclimated reader some complexities were unavoidable. Suffice it to say, though the universe is simple, infinity is not.”
Many Regards
TJ GINN
Buy it now on Amazon
Watch the YouTube Video
Posted by TJ Ginn at 1:18 PM No comments:

TJ Ginn
TJ Ginn Author - Philosopher - Theologian - Scientist With an ever increasing number of titles including poetry and prose to fiction and thesis, what emerges is the realization that Ginn produces writings that are meaningful to the reader's life. Extending from the real world of science and physics, this philosopher keeps things real while illuminating some of the deepest questions anyone could ask. You can always expect to learn something new and profound and if you think Theology is alchemy, think again. You may find that it really makes sense, even from a scientific point of view.